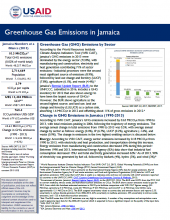 This factsheet provides information on 2013 greenhouse gas (GHG) emissions in Jamaica. Included is an overview of emissions by sector, changes in emissions, information on carbon intensity, as well as climate change mitigation targets and plans.
Jamaica's total GHG emissions in 2013 were 10.3 million metric tons of carbon dioxide equivalent (MtCO2e), totaling 0.02% of global GHG emissions. Jamaica’s GHG emissions in 2013 were dominated by the energy sector (72.8%), with manufacturing and construction, electricity and heat generation contributing 71% of sector emissions. Industrial processes were the second most significant source of emissions (8.9%), followed by land use change and forestry (LUCF) (7.8%), agriculture (6.1%), and waste (4.4%).
In 2015, Jamaica adopted a Climate Change Policy Framework intended to support the Vision 2030, mainstream climate change into sectoral and financial planning, and build the capacity of sectoral institutions to develop and implement their own climate change adaptation and mitigation plans. In its Intended Nationally Determined Contribution (INDC), submitted to the UNFCCC in 2015, Jamaica commits to unconditionally mitigate the equivalent of 1.1 MtCO2e per year by 2030 (equivalent to a reduction of 7.8% of emissions) compared to the 2030 business as usual scenario.

This User Guide explains some of the terminology in this GHG Factsheet.

Geography:
Latin America & Caribbean
Country:
Jamaica
Tell us how you used this resource