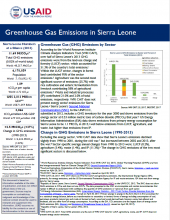 This factsheet provides information on 2013 greenhouse gas emissions (GHG) in Sierra Leone. Included is an overview of emissions by sector, changes in emissions, information on carbon intensity, as well as climate change mitigation targets and plans.
Sierra Leone’s total GHG emissions in 2013 were 11.69 million metric tons of carbon dioxide equivalent (MtCO2e), totaling 0.02% of global GHG emissions. Over half of Sierra Leone’s 2013 GHG emissions were from the land-use change and forestry (LUCF) sector, which accounted for 51.3% of the country’s total emissions. Within the LUCF sector, changes in forest land contributed 95 percent of the sector emissions. Agriculture was the second most significant source of emissions (25.7%) with rice cultivation and enteric fermentation from livestock contributing 58% of agricultural emissions.
In its Intended Nationally Determined Contribution (INDC), Sierra Leone discusses a conditional target or “desired outcome” whereby it intends to maintain its relatively low emission levels (defined as close to the world average of 7.58 MtCO2e) by 2035, or to be carbon neutral by 2050 by reducing its carbon footprint and following green growth pathways in all economic sectors. The INDC identifies several priority climate change mitigation strategies, including: (1) strengthening the Environment Protection Agency to institutionalize the monitoring, reporting and verification of climate change, (2) promoting energy efficiency and diversifying the energy mix through renewable energy sources, (3) enhancing waste management systems, (4) strengthening transport infrastructure, and (5) adopting climate smart and conservation agriculture.

This User Guide explains some of the terminology in this GHG Factsheet.

Geography:
Africa
Country:
Sierra Leone
Tell us how you used this resource