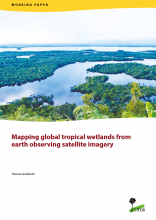 Wetlands only cover a few percent of the global land surface, but their soils contain as much carbon as the entire biosphere. Yet the extent, volume and carbon content of the world’s wetlands are not accurately known, in particular, for tropical and sub-tropical regions. This working paper, released in 2012, describes work by CIFOR to map and classify wetlands.

It developed two indexes: the first is a climatic topographic wetness index and the second is a chrono-sequence of annual satellite images from the moderate resolution imaging spectroradiometer (MODIS). It had developed a third wetness index for radar (L-band) data, but the available global data was plagued by positional errors.

The surface wetness index it developed, the paper states, is new. In regions with enough reference data, the study was able to classify wetlands over space and time and how they are influenced by seasonal and interannual climate variations.

CIFOR notes that several of the techniques and methods developed in this study have the potential to be improved and, hence, could lead to better predictions on global tropical wetland distribution.

Geography:
Global
Tell us how you used this resource